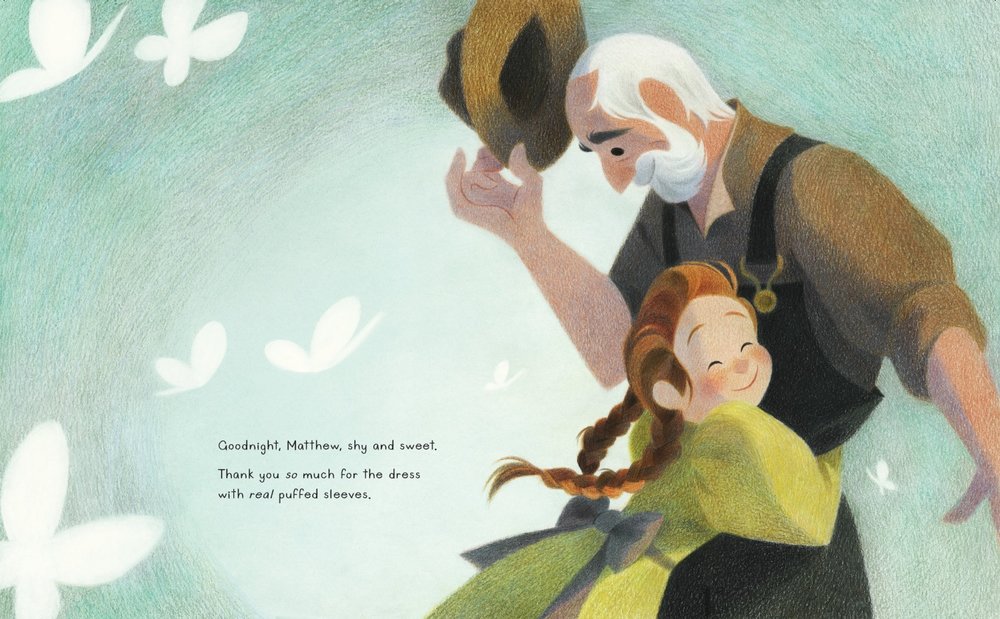 Of all the characters in the whole wide world of children’s books, one of my very favorites is a red-haired orphan from Prince Edward Island. I’m sure you know the one—she answers to the name of Anne of Green Gables. The Anne books have a special place in my heart, as I know they do in the hearts of so many other women and girls for whom Anne has been a literary “kindred spirit.” My friends with young daughters have wondered aloud to me about when the right age is to introduce the Anne-girl; grade school or early middle school? Better as a family readaloud, or read on one’s own? I certainly do not claim to be an expert on those questions, but I can proclaim the delight I felt when I recently found two new Anne books, written specifically for younger readers. One is a picture book and the other an early chapter book, both beautifully adapted from L.M. Montgomery’s Anne of Green Gables by author Kallie George. I admit that I often shy away from “younger,” more simplified versions of classic books. They draw me in with the familiar characters and illustrations, but they never seem to capture the soul of the original story that I love. But not so with these, I’m very glad to say! Both books still capture Anne’s wonderful turns of phrase and humor, and left me feeling very Anne-ish when I finished reading them.

Goodnight, Anne (illustrations by Geneviève Godbout) falls squarely in the “bedtime book” tradition, featuring a character (Anne) getting reading for bed and bidding goodnight to the things around. As Marilla announces bedtime, Anne sends her goodnight wishes to Matthew, Diana, Mrs. Lynde, and all the other familiar inhabitants of Avonlea. Each farewell includes character descriptions and little plot details, so the reader has a sense that these characters have real history together—they’re not just included for the sake of throwing in a familiar face. Anne wishes, “Goodnight, Matthew, shy and sweet. Thank you so much for the dress with real puffed sleeves.” (Both these books include Anne’s customary italics for emphasis, and that is one small detail that I think helps retain the spirit of the original. What is Anne without her italics!) Of course, since it’s Anne, the natural world is not to be left out of this tale—the Lake of Shining Waters and the Snow Queen also get a goodnight shout-out, capped off by musings about how wonderful it would be to spend the night in a cherry tree. Finally, Marilla sets her foot down (gently), and it’s sweet dreams for Anne with an “e” at last.

The early chapter book is titled Anne Arrives, and it more traditionally follows the plot structure of the first quarter of Anne of Green Gables—opening with Mrs. Lynde noticing Matthew on his way to the train station, and ending with Marilla’s decision that Anne may stay at Green Gables, with Anne’s insult and apology to Mrs. Lynde added as the main conflict. The story is broken into eight short chapters, with a few sentences on each page, accompanied by Abigail Halpin’s lovely, whimsical illustrations. Almost every image includes a bunch of flowers, another detail which makes the book feel truly Anne-ish! This is a perfect introduction to Anne for a reader just venturing into longer books on their own. The cover flap describes it as “first of a charming chapter book series,” which I hope proves true! I’m glad to have found these Anne stories for younger readers, and I hope Kallie George has more of them up her sleeve.