You or some part of your family live out some cliché. Mine is the Appalachia-holler one.  My grandfather was one of twelve kids growing up in Burrell Holler, NC, in the Blue Ridge Mountains. His momma made legendary biscuits and pork gravy, and his feisty father nicknamed him “cat”.  He left home as a teenager to become a cowboy and later worked with his dad running shine.

For those unfamiliar, “shine” is the contraction of the nickname of home-made liquor, “moonshine.”  And “running shine” refers to the distribution of said illegal product. Traditionally, those who ran shine souped up their cars’ shocks to be able to hold a lot of product and their engines to outrun the law if needs be.  After prohibition ended in ‘33, these fast cars and their drivers set to racing each other and eventually became NASCAR (National Association for Stock Car Auto Racing).

Stock cars are a simple idea. You start with a standard car frame and fill in all the other bits in the way that you want. The frame’s the same, the art’s in the parts.

Stock cars are the inspiration of my term “family stock stories.” Stories where you have a basic frame and the parts are different plot lines for each story.  The “family” part comes from the idea that our family is in them.

My kids call them “The Jungle Stories”. Over the years (we have five kids aged from one to eleven), despite a nightly reading schedule of good children’s books, these stories remain the most cherished and requested. I’ll talk about why a little later.

First, let’s look at the frame.

The stories start and end exactly the same way.

Each child has a story name that is similar to theirs, and we joke around saying it’s not really them. Yet every child knows  who their character is and identifies with them. Each also has a weapon that may or may not be used in the plot.

This frame has produced about ten stories over six years, but ninety percent of the time one of these four are requested:

The Hungry African Hunting Dogs and the Thankful Bee

The Crocodiles of Peach Island

Stock stories are a great idea for several reasons:

Why do (my) kids love these stories so much? There are several reasons. First, they are stories. People like those.  Secondly, the stories are told by their Dad.  Kids like things from their parents. There’s both adventure and predictable elements.  Familiarity and variety are things people like.

But the primary reason that the kids have mentioned to me that they like the stories is that the adventures happen when the parents are asleep, and the kids are the ones who have the adventure.  While this may be unique to my own kids, I suspect that they are touching on something that is more human.  Certainly, it is developmental, as kids grow in their understanding of who they are outside of their parents over time.

But even deeper than that, we image bearers innately see ourselves as exciting characters in a story just like my kids see themselves in their Jungle Stories. You see, in our Jungle Stories, it is never the children’s weapons that ultimately win the day, but rather the character and love behind their choices, even when they have to choose to use their weapon.  Their beloved story-world is one where self-denying love and a fell sword can both be perfectly wielded. The story is marked by conflict and peril, but ultimately ends in a quirky and happy comedy where love wins the day.  It seems we humans, at our best, imagine ourselves into echoes of the real plotlines of our own lives.

For the actual life we live is also the story-world that God is weaving in time and space.  In God’s redemption fantasy story, we are his 3D characters. There as N.D. Wilson says, every atom has a complete backstory known only to its Author. A story where every idle word that his characters choose is worthy of the Author’s strict evaluation, and thus every moment and breath is charged with meaning.  A serious meaningful story-world whose expectations don’t crush us because we can find our ultimate acceptance for reasons outside of ourselves. A story where all His plot lines are found resolved in a given Son.

This is the actual world we live in.  Thus, we shouldn’t tell stories to escape reality but rather to flee into it. After all, some stories in the non-fiction section are as false as a bootlegger’s alibi, while some “made-up” stories are as true as the sun rises.  So, let us imagine ourselves and our kids into God’s reality for our everlasting joy.

Go ahead… pick a frame, any frame, but in all your stories, tell the story. 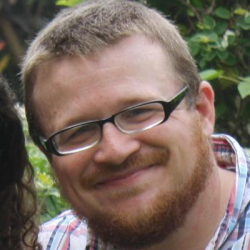 Adam Huntley
Adam, his wife Ruth, and their five children split their time between the jungles of Central Africa and the urban jungle of Dallas serving Bible-less language communities.

A man once gave Adam a monkey for saving his life.