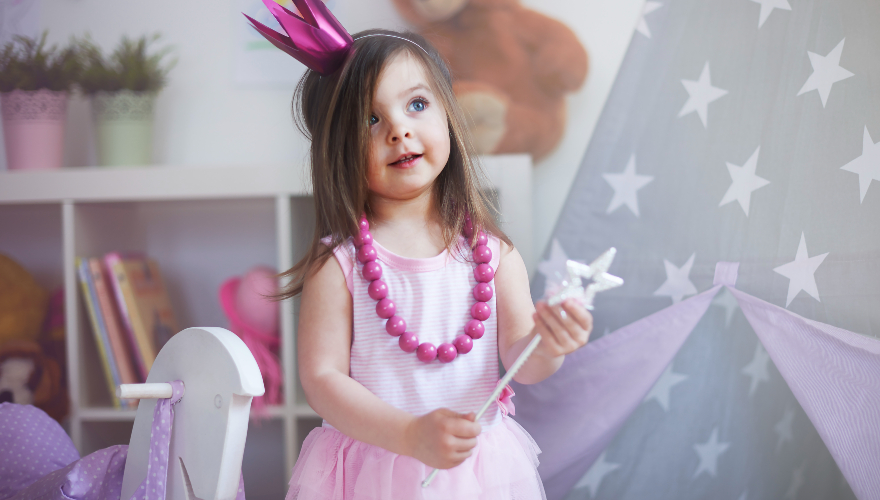 I wasn’t expecting it. The visceral response, the feeling as though I had stepped back in time, into a place that once belonged to me but no longer did. It was just supposed to be a visit – a short one to pass the time as I adjusted to new normals.

I was not doing particularly well as my kids aged and grew, as I inched closer to moving our oldest out of the house and into a dorm room. Two of my kids were now driving, and the third was not far behind. I wasn’t sure where this left me, and I was taking everyone up on invitations to visit. After hearing I could use some company, she invited me over, a friend whose two girls doted on their little brother and ran through mud.

I think it was the princess costumes that first hit me. They were pink and resembled so closely the ones my girls wore that I wondered if we had passed them down to her. The princess puppy pajamas sticking out from under the full dress caught my eye and deposited lead in my chest. Her hair was a mop of mess on her head, one that had maybe been brushed, but likely had not, and she clutched beads in her little hands.

“I am practicing today, and there is a pattern. What is difficult about it is that there are only so many pink, and pink is the one I use the most.” Her seven year old speech sounds half adult and half toddler and the familiarity of it wrecked me.

She led me to the couch. Her younger sister came up behind her, bearing the same name as my second born, and the older sister explained that “She is just learning to weave and it isn’t as complicated as what I’m doing.”

The weaver went to get her craft to show me JUST how complicated it was and informed me that “Sometimes it is easy and sometimes it is actually really hard,” and possibly I had never heard truer words in my life.

I listened to them chatter and saw the books and the knitting and the yarn and the beads and I couldn’t breathe. I asked to use the restroom.

“There is only one that is not under repair. I will show you.”

I laughed at that, wondering who uses terms like “under repair” except for a little girl who had sat under the cover of books for her entire, tiny life.

I closed the door to the restroom that was not under repair and cried. This friend was a wonderful woman, but we weren’t so close that I could fall apart on her couch, in front of her children. (Honestly, I don’t fall apart on anyone’s couch except my own.)

We pulled out knitting, and the morning floated by on wings of memories that could have been mine. I watched the beading and the weaving and learned about how to do it, was allowed to help, and was even offered a discount on a project that would be crafted just for me. I would have paid a hundred dollars for anything they wanted to make me, but they didn’t understand that nor could I explain it.

The rhythm of knitting among books calmed me, and I was able to enjoy the last part of the visit. When I left, the kids were testing their mother, picking at each other, and I smiled as I walked out the door.

I can’t explain this experience as deeply as I can feel it, though I think maybe it’s the first of many and that the finality of never being able to go back is more paralyzing than I knew.

I also think experiences like this hold deep truths that are hard to verbalize. There is a lament, yes, and a sadness that only a mother would understand – a deep, deep sadness, knitted with memory into a garment which will someday keep me warm. I know this because older women never look sad when they are near young children. Instead they look almost ethereal, wrapped in a cloak of Once Was, as if the very lives lived in front of them are their own, and indeed pieces of them are.

Someday that will be me I think, standing in the midst of memories being made with pride and joy and thanksgiving. But today? Today was hard.

I think maybe five year old weavers say it best, the wisdom of all the world plied into their bits of yarn as they work through the steps:

Tia Phillips
Tia is a homeschooling mother living in Northwest Missouri.When she’s not teaching Algebra or History, you can usually find her buried in stories, yarn, or a recipe for which she is missing a key ingredient.

To read more of her work, visit www.skippingsideways.com.