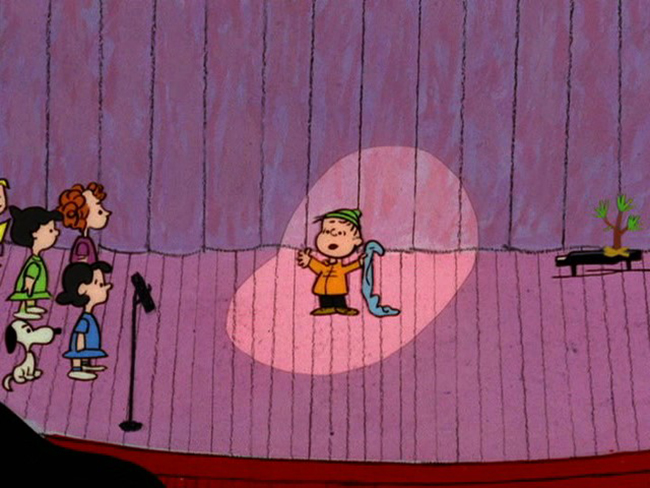 A few weeks ago, we did our traditional visit to the pumpkin patch, followed up by a family viewing of “It’s the Great Pumpkin, Charlie Brown.” This viewing was made even better by a friend who joined us that night, who couldn’t remember having ever seen the cartoon. It was sweet to make the introduction to him. “Great Pumpkin” will never surpass “A Charlie Brown Christmas” for me, but it’s very dear to my heart, mostly because so much of the story centers around Linus.

Linus, Lucy’s little brother, that blanket-toting, pure-hearted boy, is sure that the Great Pumpkin will rise out of the pumpkin patch come Halloween night. In the face of protests from Charlie Brown and other friends, and even his own sister’s threat that she will “pound” him, Linus carries on in his sincere belief that the pumpkin will appear. Only Sally, Charlie Brown’s little sister, supports Linus, but it’s mostly because she is smitten with him.

He carries on in his ‘sincere belief’ — sincerity is the word of the day for Linus.

Each year, the Great Pumpkin rises out of the pumpkin patch that he thinks is the most sincere. He’s gotta pick this one. He’s got to. I don’t see how a pumpkin patch can be more sincere than this one. You can look around and there’s not a sign of hypocrisy. Nothing but sincerity as far as the eye can see.

The Great Pumpkin never appears, and as the night wears on, Linus’ friends mock him. Sally deserts him, angry that she has missed trick or treating with the rest of the gang. As everyone retreats to their homes for the night, Linus promises to put in a good word for them with the Great Pumpkin “if he comes.” “If”?! Linus panics. He should have said, “when!” He’s terrified that the Great Pumpkin will pass him by because he gave the tiniest indication of doubt.

Linus quietly assumes the stage, calls for the lights to be dimmed, and recites Luke 2:8-14.

And there were in the same country shepherds abiding in the field, keeping watch over their flock by night.

And, lo, the angel of the Lord came upon them, and the glory of the Lord shone round about them: and they were sore afraid.

And the angel said unto them, Fear not; for, behold, I bring you tidings of great joy, which shall be to all people.

For unto you is born this day in the city of David a Savior, which is Christ the Lord.

And this shall be a sign unto you: Ye shall find the babe wrapped in swaddling clothes, lying in a manger.

And suddenly there was with the angel a multitude of the heavenly host praising God, and saying,

Glory to God in the highest, and on earth peace and goodwill towards men.

“…That’s what Christmas is all about, Charlie Brown.” Cue the tears. Little Linus, alone in the spotlight, has bravely stood against the tide of selfishness in his friends and made the point: Christmas is not about you. It is about an event — in Bethlehem. It is about a person — Christ the Lord.

Could it be that Linus’ willingness to believe in the Great Pumpkin laid the groundwork for his understanding of the true meaning of Christmas? I say yes.

When it is serving us correctly, fiction serves as a scaffolding for truth. Imagine scaffolding for a moment: it provides a framework for people to get higher. It is not the building itself. Compared to the strength of the building, it’s a temporary structure. But it serves an important purpose. (More on scaffolding here at Living Books Library)

Fiction can lay the groundwork for faith in a positive but subversive way. It interacts with our imagination. It links our head and our heart. It helps us to imagine a world we don’t see in front of us. Isn’t this what true faith does: causes us to live for a world we cannot (but will one day) see?

Fiction can also help us wrestle through difficult, abstract theological truths. I’ve seen my own children use fiction to get their arms around the nature of God. One of my favorite examples of my own kids’ grasping at truth in this way came a few years ago. We were reading a chapter of Proverbs one morning, and my middle son commented on the following verse:

wait for the LORD, and he will deliver you.

He said, “That reminds me of The Lord of the Rings, when Gandalf says ‘A wizard is never late, nor is he early; he always arrives precisely when he means to.’”  (Tolkien purists, my apologies — this quote is in the film only, not the book.) What my son was doing in that moment was trying to get his arms around what it means to wait for a sovereign God. You might feel a little like Frodo — confused, and knowing you wouldn’t choose it to be that way, but ultimately trusting Gandalf’s character and history of keeping his promises.

In a similar way, Linus’ eagerness to believe in the Great Pumpkin, despite his friends’ cynicism and outright hostility, lays a good groundwork for his faith. He is open to wonder. He desires sincerity, a feat that is downright noble in our age filled with sarcasm and skepticism. He is willing to believe in the supernatural.

But consider the difference between his “belief” in the Great Pumpkin versus his belief in the true meaning of Christmas. In October, he is frantic, nervous — he’s afraid if he says the wrong thing, he’ll get passed over. In December, he is settled, quietly confident that he knows the truth.

This Christmas, we as parents ought to focus on the One Great Story. But let us not fear entering into lesser stories. These smaller stories, when they are allowed to do their work, serve us and allow children to access that One Great Story.

Merry Christmas, Linus. And thank you.