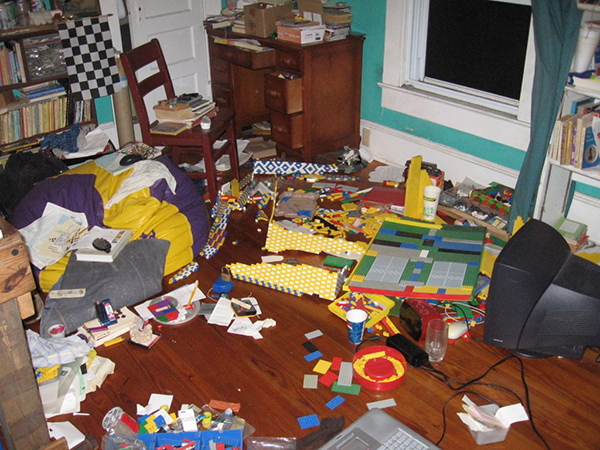 I was cleaning out a box of stuff in my youngest son’s bedroom when I found a homemade book — five or six pieces of white paper folded in half and stapled down the middle to make a spine. The pages were packed with little kid drawings and some words to a story.

My organized friends would know instinctively what to do with a find like that. They probably have Rubbermaids labeled “homemade books” ready and waiting. But sorting little kid stuff is hard for me. I can’t decide what categories to make, what to keep, what to give away; so I  stand there frozen, with a stupid, defeated look on my face, trying to decide which pile gets the ginormous yoda head and which pile gets the plastic bouncy ball with the Hello Kitty cheerleader suspended inside it.

Once I figure out where those two things go (half an hour later, and after much deliberation), there’s a math worksheet, a bookmark, a yoyo missing a string, a 3” plastic sword, a single wiggly eye, a decoder ring, an interesting rock, a seashell, and half a page of stickers. It breaks me out in a sweat just writing down that list.

Somewhere out in the world there is a 30-something Pintrest mom whose kids have been filing their own coloring pages in manilla folders since they were 11 months old. These kids know where the puzzles go. They don’t make a mess when they finger paint. I am not that mother. Our house operates by a system that I call “Nuclear Boho.” My domestic elan lends itself to blow-everybody’s-mind creativity about twenty-five days a year, and then we spend the other 340 days looking for clean socks and underwear.

OK that’s an exaggeration. Kind of. But sorting kid stuff is difficult for me because I analyze everything too much. I get too emotionally involved.

The Hello Kitty bouncy ball, for instance. Should I keep her in the box with other spherical objects? Is “round” a good theme? Is she too feminine to be kept with the baseballs? Does she want to hang out with the action figures or would that be an emotional trigger for her because everybody else is free to move arms and legs and she is eternally condemned to float in a rubber prison?

I blame the movie Toy Story for pushing my hyperdrive imagination into a full-blown cleaning paranoia, because now I’m scared that if I am thoughtless, if I shove Hello Kitty into the wrong bin for six months, she’s going to write some sort of tragic love song about how I’ve wrecked her life. I pick her up and stare her in the eyes, trying to figure out if she looks like she’s in love with one of the Transformers. I’ve seen those two hanging out. If they are “a couple,” should they go in the same box or should I keep them apart until he’s ready to commit? Have either of them kissed dating goodbye?

It’s all so complicated.

And that’s where I’m frozen when I run into the stapled book my youngest son has made. Guys, this book is cute. Big old scrawly letters and the kind of brave, reckless illustrations kids make when they haven’t learned to be ashamed of anything much yet. So I flip through it and toss it in the pile with all the random papers, then move on to pick up a Poppleton book.

Poppleton is easy. Cynthia Rylant goes in the shelf beside the bed, the elite shelf where all the good books go. The special books. The works of literary art.

And smack in the middle of that thought, my chest started to hurt a little.

“The shelf where all the good books go.”

Gosh, I’d made a mistake.

I reached down and grabbed my son’s homemade story out of the papers pile and tucked it into the best shelf in the house. Why? Because it’s good for him to see his work taken seriously. It casts vision.

When our babies are born we spend all this time obsessing about the names we should give them. Parents have late night conversations like:

“She needs a middle name that’s funky, and a first name that’s classic, so she can pick either when she’s in seventh grade and wants to reinvent herself. She needs a name that is bookish but not dorky. Her initials can’t spell P.O.O. or R.A.T. and we cannot name her _______________ (the name of that girl you hated in sixth grade). And I don’t/do want it to be a name that would be printed on a coffee mug in the Mammoth Cave gift shop.”

We obsess about that name because we think it is going to matter so much, and it does matter. But what we don’t realize is that the task of naming has only begun at birth. For the rest of our children’s lives we will be naming them. We will say,

“Oh! You’re a writer.
“You’re the stubborn one.
“You’re a thinker.
“You’re brave!
“You invent such cool stuff!”

Or, “You are the peacemaker.
“You are creative.
“You are a delight.
“You are interesting…”

We will name by our willingness to look down the trajectory of Christ’s pursuit of their young hearts, and we will name as we continue to see an identity that sometimes gets cloudy in a difficult world.